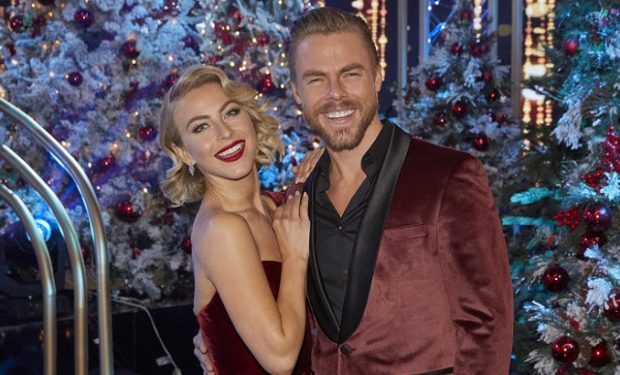 NBC is broadcasting a one-hour TV special, Holidays with the Houghs, starring former Dancing with the Stars professional dancers and choreographers Julianne Hough and Derek Hough. Recently, the siblings have been working separately — Julianne as a judge on America’s Got Talent and Derek as a judge on World of Dance, so fans are excited to see them performing together on TV — and a holiday dance musical no less.

While rehearsing a sibling rivalry routine, where the two gorgeous dancers fight over a gift, at the end Julianne seems to surprise her brother when she gives him a purple nurple (she twists his nipples with a pinch). It drops brother Derek to the floor, if only in jest! Watch video below.

Many celebrity friends have chimed in including actress Kimberly Williams-Paisley who wrote: “This is AWESOME” and Julianne’s husband Brooks commented, “I love this.”

Holidays with the Houghs airs Monday, December 16 at 10 pm on NBC, right after the first night of The Voice‘s Season 17 live finale. [BONUS: Stream any NBC show watch LIVE on any device with NBC UNIVERSAL app available here. Download is FREE.]