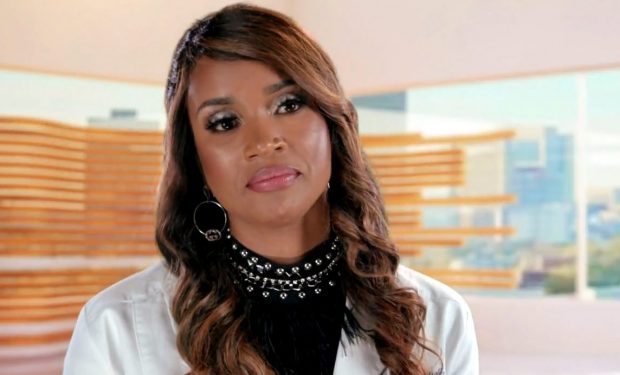 Dr. Contessa Metcalfe on Married to Medicine on Bravo

On the Married to Medicine episode “Revenge of the Sip and Paint,” the couples (and divorcee Quad Webb) are still in Cabo, Mexico. While sitting around the dinner table, Dr. Contessa Metcalfe’s husband Dr. Scott Metcalfe says he supports his wife’s decision to go back to school but admits it has complicated their family life.

When Contessa hears those words coming out of her husband’s mouth, she walks away from the table. Scott says it would have been easier if she chose a program in Atlanta (she’s taking classes in Ashville and is there four days a week). The kids “aren’t adjusting well.”

Contessa breaks down in tears and tells the camera, “I’ve always given up a lot for our family and our marriage.” She explains, “I did not want to leave the Navy. I really enjoyed that life.”

When she met Scott they were in a long-distance relationship and for the first year of their marriage. After having her second baby, she says Scott said he didn’t want to move anymore because “it’s disruptive to the family,” so Contessa left the military, where she was a flight surgeon. During her residency at the National Naval Medical Center, she also learned to how to fly planes.

Married to Medicine airs Sundays at 9 pm on Bravo, right after The Real Housewives of Atlanta at 8 pm. [BONUS: Stream any BRAVO show through the BRAVO Digital App found here. Download is FREE.]