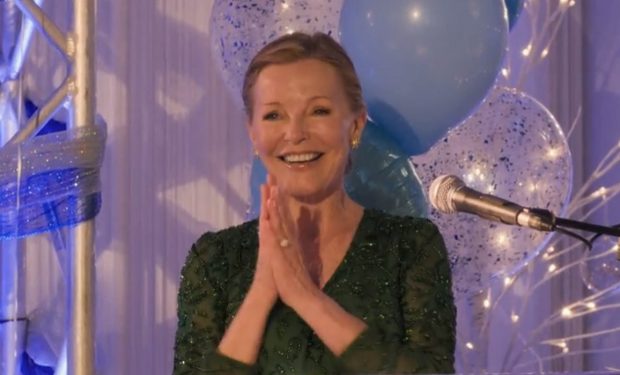 The protagonist of the Lifetime movie Grounded for Christmas is pilot Nina (Julianna Guill, The Resident). When a winter storm hits Cleveland and grounds flights, all the hotels quickly fill up leaving travelers stranded.

But not Nina; her parents live nearby. She reluctantly brings her “arrogant but charming” fellow pilot Brady (Corey Sevier) home with her. Nina’s mother is portrayed by former Charlie’s Angels star Cheryl Ladd! [More Lifetime movies streaming are always available.]

In real life, Ladd is the mother of gorgeous actress Jordan Ladd. Cheryl Ladd captioned the photo above: “The 🍎 doesn’t fall far from the tree!”

Jordan Ladd is known for her roles in films including Never Been Kissed with Drew Barrymore, and Quentin Tarantino’s Death Proof with Kurt Russell and Rosario Dawson, among others.

The photo below of mother and daughter at the premiere of It’s a Wonderful Lifetime had many fans leaving “twin” comments including “You two look like lovely twins!!’

Cheryl Ladd is, of course, a Hollywood bikini legend from her posters and Charlie’s Angels days.

So proud of my mom and always blown away with our Death Proof sister Rosario! @Un4gettablefilm pic.twitter.com/IZn0UqJ5Q1

Grounded for Christmas premieres on Lifetime on Sunday, December 8 at 8 pm. [BONUS: Stream any Lifetime show anytime through the Lifetime Live On Demand TV app here. Download is FREE.]