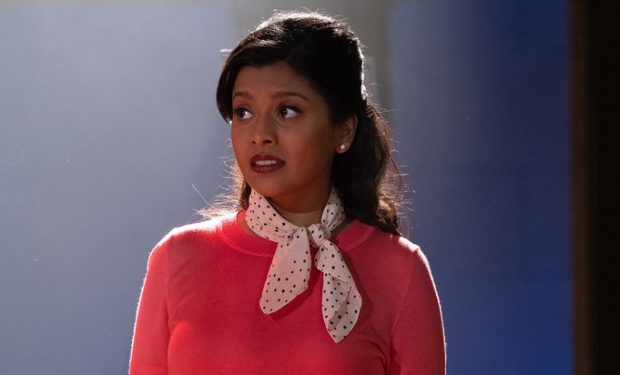 Tiya Sircar as Vicky on THE GOOD PLACE (Colleen Hayes/NBC)

The protagonist of the Lifetime movie Christmas 9 to 5 is crime beat reporter Jennifer Clark (Tiya Sircar). When she gets assigned “to find the true meaning of Christmas,” she goes undercover at department store where she works as a sales clerk (from 9 to 5) during the busiest time of the year — from Black Friday to Christmas Eve. Along the way, over the din and commercialism of the holidays, she also falls in love.

Sircar, who is best known for her recurring role as Vicky on The Good Place, will appear next in the reboot of the The Fugitive (the Harrison Ford movie and the old TV series) with Kiefer Sutherland. Sircar will yet again play an ambitious reporter!

When not on a TV or movie set, Sircar shows a different (less modest) side of herself on Instagram. Check out the gorgeous string bikini photo above — where she’s stretching out on a FunBoy float, and the pin-up pic of her in a short romper posing on the iconic Friends couch. And then there is the leopard print…

Christmas 9 to 5 premieres on Lifetime on Sunday, November 24 at 8 pm.