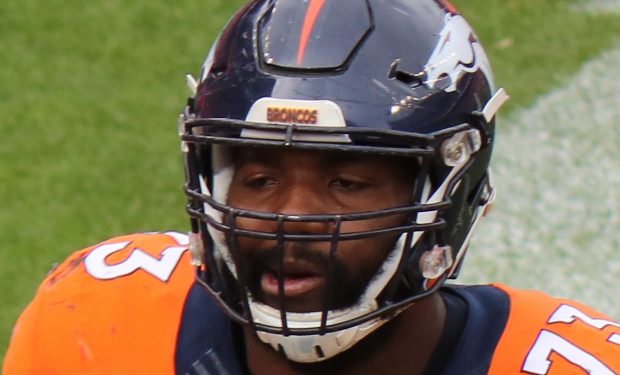 Russell Okung is the 6’5”, 310 lb. offensive tackle playing with the Los Angeles Chargers in the NFL. He played college football at Oklahoma State before he was selected by the Seattle Seahawks with the sixth overall pick in the 2010 NFL Draft.

After his six-year contract ended with the Seahawks in 2016, he played one season with the Denver Broncos (2016) before signing a four-year, $53 million contract with the Chargers in 2017.

When not on the field, Okung (who is of Nigerian ancestry) spends time with his gorgeous Eyptian-born wife, Samar Okung, who is a new mom and a realtor.

She is currently trying to sell “the ultimate entertainment home” as seen in the photo and video above. The 5-bedroom, 8 bathroom Los Angeles home is listed for $13,995,000.

They named their baby boy, Cairo!

The Kansas City Chiefs (6-4) vs. Los Angeles Chargers (4-6) game will be broadcast live from Estadio Azteca in Mexico City on Monday, November 18 at 8 pm on ESPN.