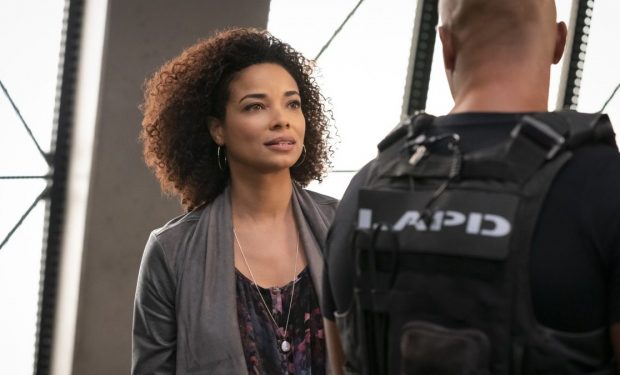 In the S.W.A.T. episode “Track,” while Chris (Lina Esco) tries to settle her relationships with Kira (Claire Coffee) and Ty (Daniel Lissing), Hondo (Shemar Moore) meets a gorgeous woman named Nichelle (guest star Rochelle Aytes) who helps the team search for thieves who are “on the run with a high-tech thermal lance that can cut through almost anything.”

When Nichelle approaches Hondo about getting her van back — which is now considered evidence — he asks for her card. She sneers at his old-fashioned ways, grabs his phone and puts in her digits.

Aytes played the wife of Moore’s character Derek Morgan on Criminal Minds (Dr. Savannah Hayes). She’s currently starring in the sci-fi series The Purge (Michelle Moore), and is also known for her roles on Mistresses (April Malloy), and Hawaii Five-0 (Greer), among others.

S.W.A.T. airs Wednesdays at 10 pm on CBS, right after Survivor. [Stream every CBS show through CBS ALL-ACCESS with a free trial.]