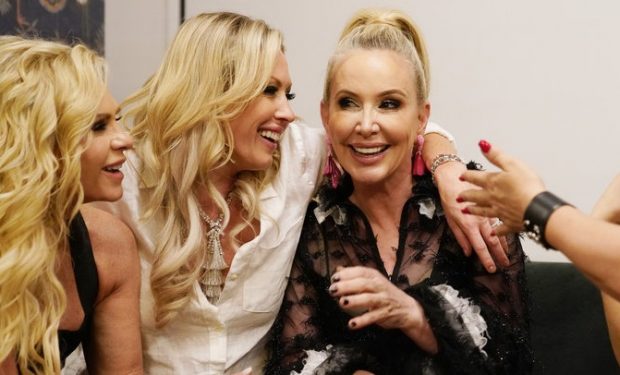 On The Real Housewives of Orange County episode “Viral Videos and Vendettas,” while a video of Tamra Judge listing rumors about Kelly Dodd goes viral, and Shannon Beador prepares for divorce court, mother of 7 children Braunwyn Windham-Burke celebrates the end of 19 years of breast feeding. At her weaning party in Florida, the ladies get surprise lap dances. As Bravo describes it, “Things get wild.”

When the two strippers (one male and one female) arrive dressed in police uniforms, Shannon hides behind Vicki Gunvalson who asks if it’s a bachelorette party.

When the male stripper who has his pants unzipped straddles the guest of honor, Braunwyn tells him, “I’m actually way more into her than you.” But it’s Shannon’s reaction to the strippers — when they approach her — that is the most hilarious.