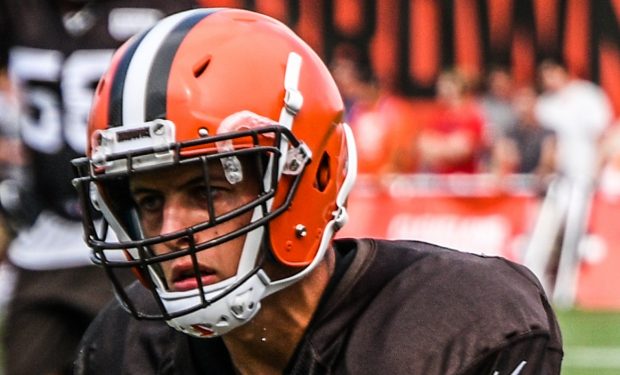 Joe Schobert is the 26-year-old NFL linebacker playing for the Cleveland Browns. He played four years of college football at Wisconsin (where he won the Jack Lambert Trophy in 2015) before he was selected by the Browns in the 2016 NFL Draft.

When not on the field, he spends time with his gorgeous wife of one-year Megan (nee McDonnell) Schobert. While in St. Lucia, the couple re-enacted the famous Patrick Swayze/Jennifer Grey lift in Dirty Dancing.

If the NFL is giving out an award for “Best Couple in a Pool”, the Schoberts would win hands-down.

Here are a couple of closer pics of Megan in bikinis!

The Pittsburgh Steelers (5-4) vs Cleveland Browns (3-6) game will broadcast live from FirstEnergy Stadium on Thursday, November 14 at 8 pm on FOX.