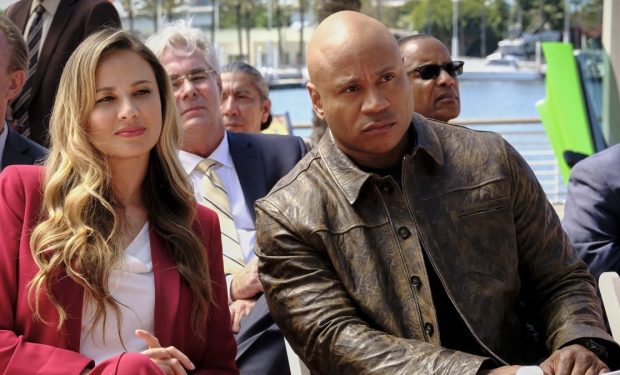 In the NCIS: Los Angeles episode “Concours D’Elegance”, the team connects the dots between the theft of an undersea drone prototype to a video game streamer’s house party. Once again, Callen (Chris O’Donnell) and Sam (LL Cool J) bump into sexy insurance broker Katherine Casillas (Moon Bloodgood), who insures the gamer’s property and processions. The character of Katie is portrayed by Paloma Rabinov.

When not on a TV or film set, Paloma Rabinov occasionally enjoys the outdoors and often in a tiny string bikini!

You can see Rabinov next on the big screen in the film Birds of Prey: And the Fantabulous Emancipation of One Harley Quinn starring Margot Robbie (Rabinov plays a roller derby teammate) – out in theaters February 7, 2020. See trailer below.

Fun fact: Rabinov is married to restaurateur Eric Tucker (formerly of Louie and Chan in Manhattan, where the couple met!). Now, together, they run the natural wine bar Melody, in LA.

NCIS: Los Angeles airs Sundays at 9 pm on CBS, right before God Friended Me at 8 pm, and right before Madam Secretary at 10 pm. [Stream every CBS show through CBS ALL-ACCESS with a free trial.] Here’s the mohawk up close!