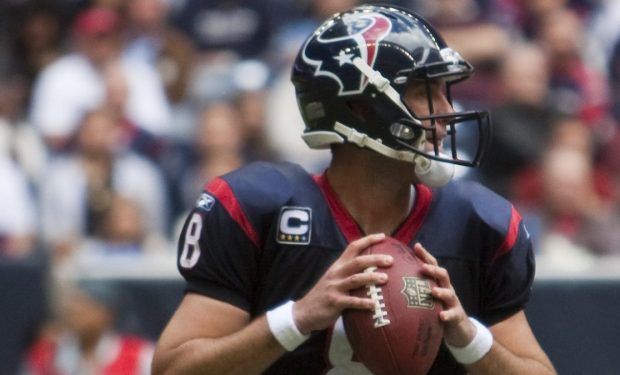 Schaub with the Houston Texans, photo: AJ Guel [CC BY 2.0], via Wikimedia Commons

Matt Schaub is the 38-year-old NFL quarterback playing with the Atlanta Falcons. The 6’6″, 245 lb. athlete played college football at Virginia before he was selected by the Falcons in the 2004 NFL Draft. Schaub played most of his NFL career with the Houston Texans (2007-2013) before returning to the Falcons in 2016.

In October 2019, Schaub made his first start as a Falcon since 2005, due to QB Matt Ryan being inactive with an ankle injury.

When not on the field, Schaub spends time with his gorgeous wife Laurie Flynn Schaub who is rocking a bikini after having their fifth child!

Swipe the photos above to see more! As one fan replied to the photo below, “Laurie, you are mom goals!”

The New Orleans Saints vs Atlanta Falcons game will broadcast from Mercedes-Benz Stadium on Thanksgiving Day at 8:15 pm on NBC.