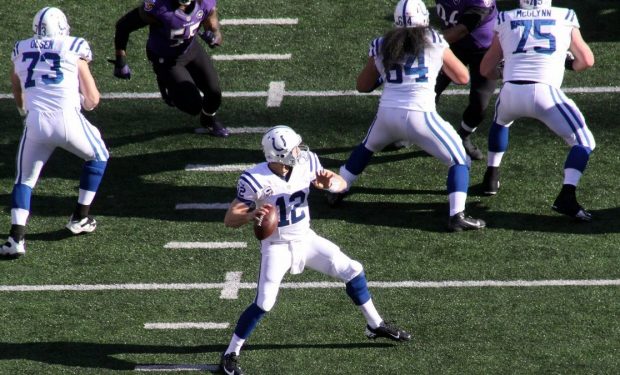 Luke Rhodes is the 26-year-old long snapper playing for the Indianapolis Colts. He played college football at William & Mary before he was named the Colts’ full-time long snapper in August 2017. In 2019, Rhodes signed a four-year, $4.85 million contract extension with the Colts, which makes him the highest-paid long snapper in the NFL.

When not on the field, he spends with his gorgeous wife Hannah Rhodes who is a competitive bodybuilder and, duh, looks amazing in bikinis.

The photos directly below are from her first bikini show. She came in fifth in her novice group and was told by the judges she needs to “lean down” her legs (cut some muscle) or go up in divisions. “I’ve worked a longgggg time for these legs and cutting them down would never be an option.”

In May she posted the before and after bikini pics below and wrote: “There’s exactly 4 weeks & 6lb difference between these photos. The left was 2 months post wedding, zero diet and occasional exercise when I felt like it. After our wedding and all of our travels, I was SO ready to get back into a routine! The photo on the right is TODAY.” She added, “I’m seeing abs again and that booty lift is coming back.”