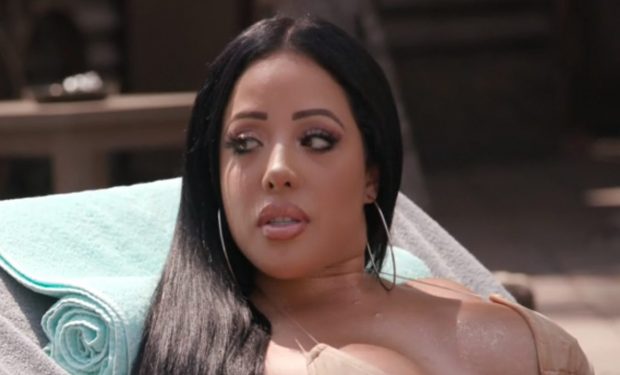 Nicole Zavala is one of the stars of the reality TV show Cartel Crew. In the deleted scene below, she and her best friend Ali go to a pool and flaunt their incredible bikini bodies on lounge chairs. While wearing the tiniest string bikini you’ve ever seen (at first, it looks like there’s no string at all but you can see it at the right angle, it’s as thick as dental floss!), Nicole talks about seeing Ali’s gynecologist. It was her first time seeing a gynecologist and her first Pap smear.

It’s a painful scene to listen to as Nicole tells Ali that the doctor told her to get “parental” pills which Ali realizes she means “pre-natal” and tries to warn Nicole about “becoming another statistic of another single mom.”

When Nicole says “I don’t know what’s going to happen” with the man she wants to have a baby with (she’s dating NBA player Torrey Craig), she adds, “But at least he gave me something special.” Nicole then breaks down in tears and says she’s done with the nightlife. “I’ve had my fun.”