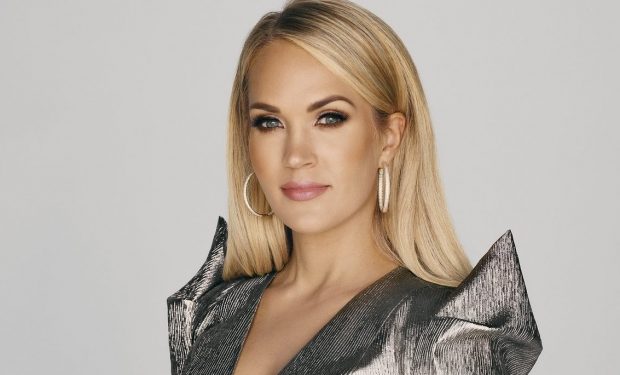 Country music star Carrie Underwood is hosting this year’s CMA Awards with special guests Reba McEntire and Dolly Parton. Right when you think it doesn’t get any better than that, the CMA Awards producers release the lineup of live performers which includes Eric Church, Luke Combs, Miranda Lambert, Maren Morris, P!nk, and Chris Stapleton, among others.

Two days before the live event airs on ABC, Underwood posed in a pair of leopard-esque print leggings under a Smashville sign — photo below. (It sounds like a real place but it’s more like a mood. Some would say “mania” that swirls around Nashville NHL Predators games which are held at the Bridgestone Arena, where the CMA Awards will be held.)

Underwood fans love her rehearsal outfit. One fan wrote “Tight and perky” and another wrote “Love the outfit” and asked if it’s her Calia clothing line, and the answer is yes! The name of the print is Peach Whip! The same print is available in a purplish blue, “Velvet Morning” see below. And the white zip-up jacket is call Cloud.

The 53rd Annual CMA Awards will broadcast live on Wednesday, November 13 at 8 pm on ABC.