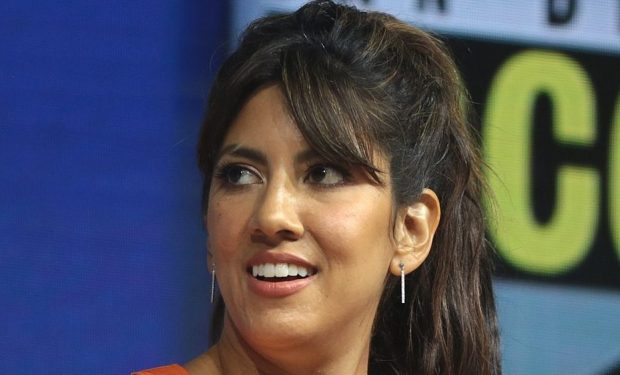 On the Modern Family episode “Perfect Pairs,” when Phil (Ty Burrell), Claire (Julie Bowen), Alex (Ariel Winter) and Luke (Nolan Gould) realize that Haley’s babies actually help them cross things off their to-do lists, they decide to give Haley (Sarah Hyland) the day off. Of course, not everything goes as smoothly as predicted.

The character Sonia is portrayed by Stephanie Beatriz, who is best known for her role as NYPD Detective Rosa Diaz on Brooklyn Nine-Nine. (The show will return in 2020 for Season 7.)

When Beatriz is not on a TV set, the Argentine beauty is likely soaking in the sun in a bikini!

Beatriz will appear next on the big screen in the highly anticipated movie In the Heights as Carla — with co-creator Broadway star Lin-Manuel Miranda and Jimmy Smits, who plays Amy Santiago’s ex-cop father on Brooklyn Nine-Nine!

The incredible scene below is staged at the amazing Gora Kadan resort in Japan. Go there.

Modern Family airs Wednesdays at 9 pm on ABC, right after Schooled at 8:30 pm and right before Single Parents at 9:30 pm. P.S. Brooklyn Nine-Nine did get renewed for a seventh season on NBC; expect season premiere early 2020.