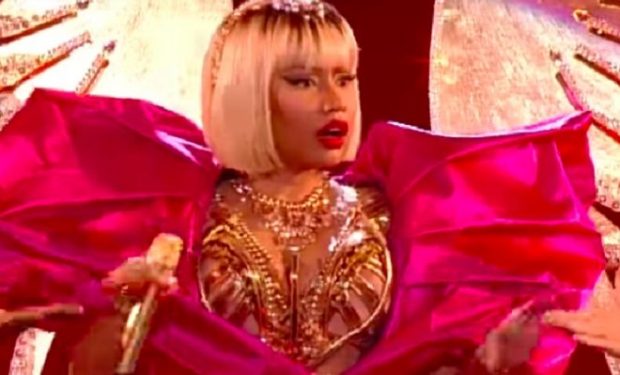 Nicki Minaj is back in the Instagram biz. The provocative superstar took a little time off at the beginning of the month, saying she was gonna lay low some with her man, Kenneth Petty.

But then came due her Fendi collab promotion and she had to get back on the gram for that. Minaj must have liked being back, because now she’s really back — and it doesn’t really look like Mr. Petty likes it.

Now if he looks happy to you in either of these photos, we respect your right to disagree! But to those we surveyed the man looks mad! Is it because Minaj isn’t wearing much more than a silver fishnet dress that reveals just about everything?

That can’t be a surprise to Petty! Maybe the paparazzi were getting a little close for his liking? That seems more like it. But she ended up with the photo — doesn’t that mean it’s her paparazzi?

Anyway, most men would be happier looking. But maybe these two photos don’t do his happiness justice…His silver Fendi jacket is pretty cool, right? Looks like Perry’s an astronaut. A mad astronaut!