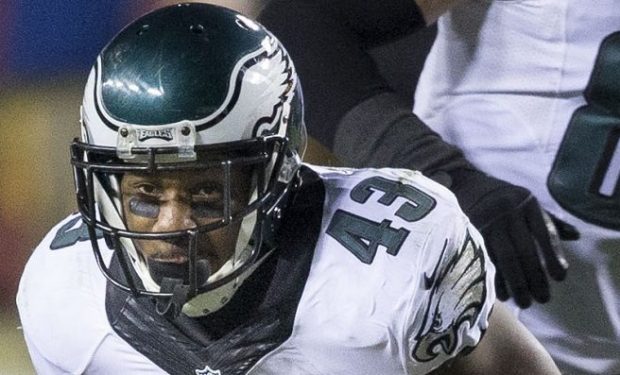 Darren Sproles is the 5’6” running back/punt returner (and Super Bowl champion) on the Philadelphia Eagles. He played college football at Kansas State, where he finished with the 6th most all-purpose yards in NCAA history. Sproles was selected by the San Diego Chargers in the 2005 NFL Draft.

In 2014, when the New Orleans Saints traded Sproles to the Eagles in exchange for a 2014 5th-round draft pick, Saints quarterback Drew Brees said after the trade: “You only see a Darren Sproles type of player come around once in your career.”

When not on the field, Sproles spends time with his gorgeous wife of nine years Michel Sproles, who is the CEO of The Pink Line, a line of hair extensions that gives a portion of its proceeds to breast cancer research. Hair with a cause, is the brand’s tagline. Seven years ago Michel was diagnosed with breast cancer and underwent a double mastectomy.

To promote The Pink Line brand, Sproles dropped the bikini beach video above of five gorgeous women modeling a variety of The Pink Line hair extensions. The video is set to the Chris Brown song “No Guidance” featuring Drake.