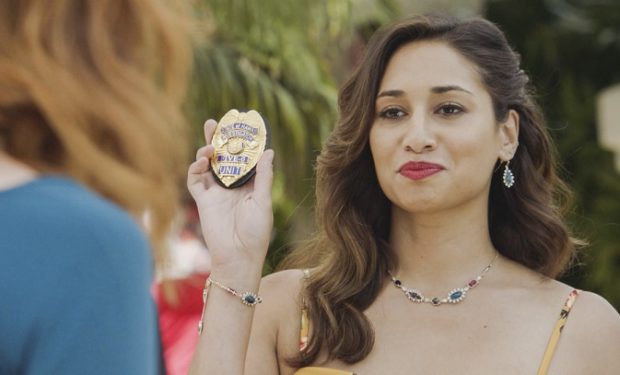 On the Hawaii Five-0 episode “Ukuli’i ka pua, onaona i ka mau’u” (“Tiny is the flower, yet it scents the grasses around it”), Tani Rey (Meaghan Rath) and the Five-0 enlist imprisoned hacker Aaron Wright (Joey Lawrence) to help when a young girl is reported kidnapped.

When not filming Hawaii Five-0, Rath takes time to wash her car (an Audi), in a full-body wetsuit, with a hose, and to the Austin Powers theme song “Soul Bossa Nova” by Quincy Jones. There are sexy parts (she licks her lips, douses herself in water) and then there are hilarious parts (when she catches herself off-guard with the hose).

She also shared a video of her co-star Anthony Dale washing his car (a Land Rover) in nothing but a pair of short shorts. Turn up the volume, it’s Joan Jett.