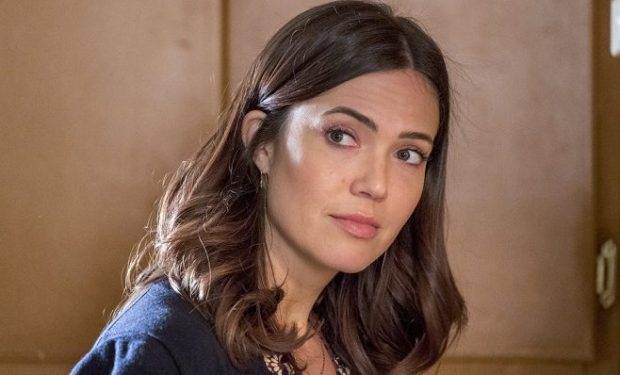 Mandy Moore as Rebecca on THIS IS US (Ron Batzdorff/NBC)

In the This Is Us episode ‘The Club’, while new parents Kate (Chrissy Metz) and Toby (Chris Sullivan) try to make time for their marriage, Jack (Milo Ventimiglia) attempts to prove himself to Rebecca’s (Mandy Moore) dad at the country club. Meanwhile, IRL, Mandy Moore is busy with music — and lingerie! (Definitely swipe!)

More photos from the lingerie shoot…

When not filming This Is Us, Moore is making new music with her new man, Dawes frontman Taylor Goldsmith, and promoting it with new sexy lingerie photos. In one photo she’s wearing just a lacy black bra. In another, she lies down in a shallow pool of water in a see-thru red robe.

Her new Single “When I Wasn’t Watching” is out now — but as Moore says, “Moore music coming.” Her fans can’t wait. As one wrote: “Been waiting a decade for this!” Moore’s last album, her sixth, “Amanda Leigh,” was released in 2009.

This Is Us airs Tuesdays at 9 pm on NBC, right after The Voice at 8 pm and right before New Amsterdam at 10 pm.