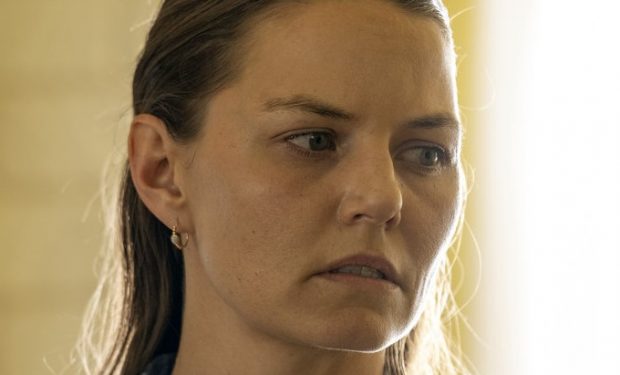 Jennifer Morrison on THIS IS US (Ron Batzdorff/NBC)

In the Season 4 premiere of This Is Us, viewers were introduced to three new characters related to the Pearson family, including Cassidy Sharp, a soldier based in the Middle East. Unfortunately, like many military veterans who return home after a tour, Cassidy struggles to assimilate back in to civilian life with her husband and son.

Cassidy is portrayed by Jennifer Morrison, who is also known for her roles on Once Upon a Time (Emma Swan), How I Met Your Mother (Zoey), and House (Dr. Allison Cameron), among others. (hey, Gloves!)

Before making her debut on This Is Us, Morrison enjoyed a vacation in El Salvador and looked amazing in a strapless bikini. She reported that she enjoyed “paddle boarding adventures” and went fishing for the first time ever. “And I discovered my favorite dessert of all time is alfajor!”

The bikini pic reveals a scar on her chest. She told Us magazine she has a total of seven scars from having moles removed. One was a melanoma, six were precancerous. She advises everyone to “Get your moles checked!”

This Is Us airs Tuesdays at 9 pm on NBC, right after The Voice at 8 pm, and right before New Amsterdam at 10 pm. [BONUS: Stream any NBC show watch LIVE on any device with NBC UNIVERSAL app available here. Download is FREE.]