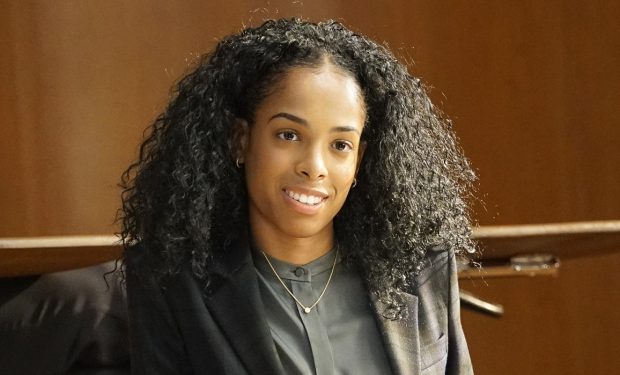 In the How To Get Away with Murder episode “Do You Think I’m a Bad Man?,” after Michaela’s (Aja Naomi King) courtroom tactics do more to harm than help, Annalise (Violet Davis) draws on memories of Sam (Tom Verica) to guide Michaela back to the winning path. There’s a memorable scene in Annalise’s classroom with guest star Quei Tann.

Tann is known for her role as Genifer in the Netflix hit series Dear White People, and as a contestant on Tyra Bank’s America’s Next Top Model (2016). That same year, Tann competed in the 2016 Transnation Queen USA pageant in Los Angeles, where Caitlynn Jenner was a judge. (Kataluna Enriquez of California won the title and crown.)

When not on a TV set or a stage, Tann is often in a bikini. In the video below, she made a parody of fellow transgender model/actress Laverne Cox who made a video of herself in a bikini, crying in front of a fan while listening to Beyonce’s “Heaven Couldn’t Wait For You.”

When Cox shared her video she admitted that it was “messy and weird with the wind and bikini” but she was reacting to the news of the federal government denying “equal access to shelters for trans people experiencing homelessness” and “reports of trans folks being murdered.” Cox wrote: “Sometimes you just have to cry.”

When Tann shared her parody video with tons of hashtags includes #comedy, #parody, #gag, , she tagged Cox: “All love don’t send any hate to my mom.”

How To Get Away with Murder airs Thursdays at 10 pm on ABC, right after A Million Little Things at 9 pm and Grey’s Anatomy at 8 pm.