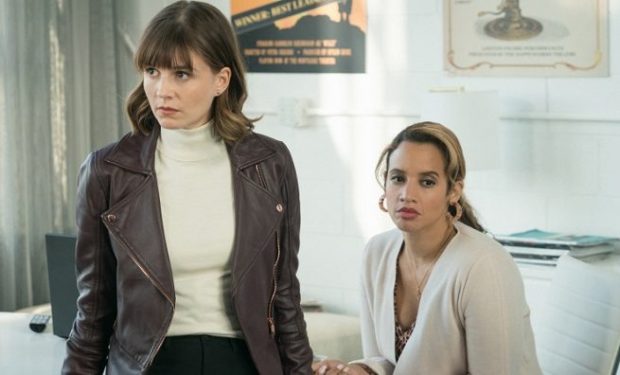 In the Evil episode “3 Stars,” Kristen (Katja Herbers), David (Mike Colter), and Ben (Aasif Mandvi) are called to action when the behavior of high-strung Broadway producer Byron Duke (guest star John Glover) turns from demanding to demonic. Duke’s assistant, Patti Hitchens, is portrayed by Dascha Polanco, who is best known for her role as Daya Diaz in Orange Is the New Black.

When not on a TV set or doing this, the 36-year-old Dominican-born beauty Polanco loves herself with celebrities including fashion royalty Anna Wintour and Kim Kardashian at red carpet events like New York Fashion Week. Polanco uses the hashtag #selflovery. Her Instagram profile reads: #ThundaThigz.

When not rubbing elbows with celebrities, Polanco is chilling with her son who took the bikini pic above of his Mami. (She is the mother of two!) She says her “butt ripples” are on display. As she says, embracing her full beauty: “Gurl get your wave on Ripple like the water YOU ARE An ocean Your body Is full of waves ]”

Below is a video of Polanco dancing in the same bikini to the song “Entre Tu Cuerpo y El Mio” (translated “Between Your Body and Mine”) by Milly Quezada.

More bikini pics of Polanco, because why not?! She looks incredibly great! She will appear next on the big screen in the upcoming film based on the Broadway hit In the Heights with Lin-Manuel Miranda.