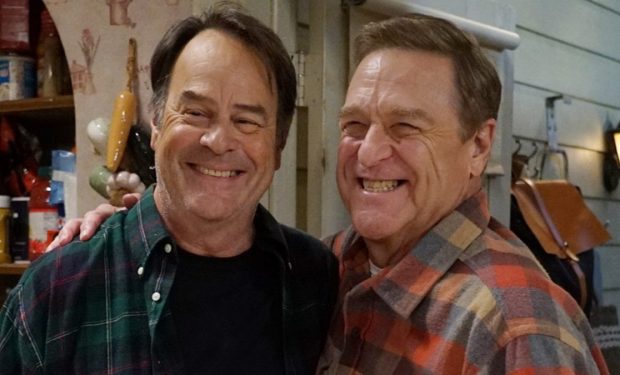 On The Conners episode ‘The Preemie Monologues’, while Darlene (Sara Gilbert) is confronted about her lifestyle, and Becky (Lecy Goranson) is overwhelmed by the costs of raising a baby, Dan (John Goodman) talks things over with his poker pals including Chuck (James Pickens, Jr.) and Buddy (Dan Aykroyd).

When not on a TV or movie set, Aykroyd spends time with his gorgeous wife (of 36 years!), actress Donna Dixon, former Miss Virginia USA (1976) and Miss Washington, D.C. World (1977). Months after meeting and working together on the set of the 1983 movie Doctor Detroit, Aykroyd married the beauty queen turned actress. They eloped!

Dixon is also known for her roles in the TV series Bosom Buddies with Tom Hanks, and for appearances in films including Wayne’s World’s (Garth’s dream woman and recipient of the “Foxy Lady” lip sync serenade)…

…and the Oscar-nominated film Nixon (Maureen Dean), before retiring from acting in 1997. Dixon and Aykroyd have three daughters.