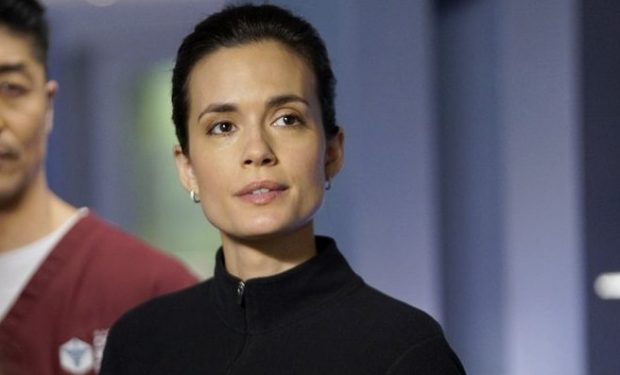 On the Chicago Med episode ‘We’re Lost in the Dark,’ while Drs. Choi (Brian Tee) and Charles (Oliver Pratt) face difficult decisions as a dying man tries to preserve his future life with a controversial scientific method, the hospital loses electricity.

During the blackout, Dr. Natalie Manning (Torrey DeVitto) is trapped in an elevator with a patient who needs open heart surgery immediately — an operation she’s never performed — and they’re running out of time.

When not filming incredibly dramatic scenes on Chicago Med, model-turned-actress Torrey DeVitto is keeping in shape and flaunting her amazingly flat abs in the Windy City. In the photo above, DeVitto reports that she’s been pushing “beyond a lot of limits” and “reaching goals I never thought I could get to” while training for the Chicago Half Marathon.

Spoiler alert: DeVitto crushed the race. She reported: “To the little girl who used to cry when she came in last during every single track meet… to the little (and big) me who never considered herself to be “athletic”, you DID IT !”

Chicago Med airs Wednesdays at 8 pm on NBC, right before Chicago Fire at 9 pm, which is followed by Chicago P.D. at 10 pm. [Stream any NBC show watch LIVE on any device with NBC UNIVERSAL app available here. Download is FREE.]