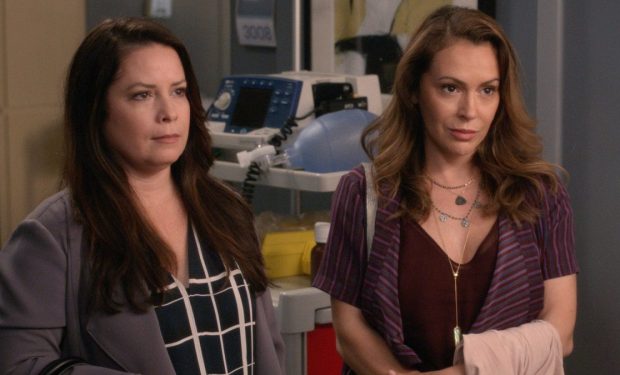 On the Grey’s Anatomy episode “Reunited,” while Meredith (Ellen Pompeo) tiptoes the line of protocol to help Jo (Camilla Luddington) with a difficult procedure from afar, a patient at the hospital is brain-dead after falling into a construction site. The patient’s two sisters, Haylee (Alyssa Milano) and Heidi (Holly Marie Combs), must decide whether or not to keep her alive.

Milano and Combs starred in Charmed, the TV series that launched the careers of Grey’s Anatomy executive producers Krista Vernoff and Andy Reaser, who were writers on Charmed.

Two months prior to the airing of the Grey’s Anatomy episode, Combs married restaurateur Mike Ryan in Carmel, California. The 45-year-old actress wore a stunning white gown and a unique tiara that resembles a thorny crown.

She says she had three ceremonies; the first was “a secret one.”

She says 3 is her lucky number — she is the mother of three children with her ex-husband, Charmed key-grip David Donoho.

Grey’s Anatomy airs Thursdays at 8 pm on ABC, right before A Million Little Things at 9 pm.