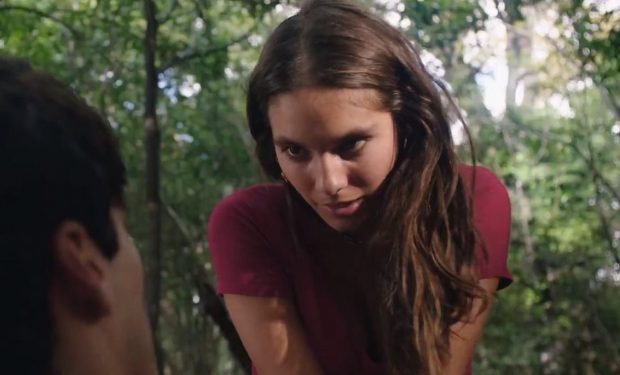 The protagonist of the Lifetime movie Kindred Spirits is single mom Chloe (Thora Birch, The Walking Dead). Chloe’s whole world is turned upside down when her younger sister, Sadie (Caitlin Stasey), comes to live with her and her 17-year-old daughter Nicole (Sasha Frolova).

Nicole is excited at first but then notices her auntie is starting to dress like her and is making moves on her high school boyfriend. Sadie is beyond immature. She working off a sinister agenda to win all of Chloe’s attention and she’s willing to murder for it. [Ya like it? More Lifetime movies streaming are always available.]

When not on a TV or movie set, 29-year-old Australian-born actress Caitlin Stasey – who’s best known for her role as Lady Kenna de Poitiers on Reign – shares photos from her real life including the bikini pic she says she used to use for her online dating profile. Stasey wrote: “I used to have this photo on my dating profile but everyone kept asking me who the red head was.”

It’s not the first time Stasey crouched down to pose with her friend’s bum!