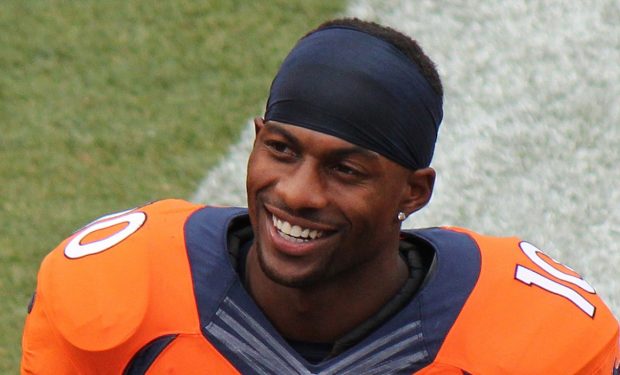 Emmanuel Sanders is the 5’11”, 180-lb. wide receiver on the Denver Broncos. He played four years of college football at SMU before he was selected by the Pittsburgh Steelers in the 2010 NFL Draft. In 2014, Sanders signed a three-year, $15 million contract with the Broncos.

When not on the field, Sanders is likely leaning on his Rolls Royce and posing with his fashionista wife Gabriella “Gabby” Waheed, mother of his two children, 5-year-old son Princeton and 3-year-old daughter Zoie.

In the photo above, Gabby flaunts her snatched waist in a $680 Off-White velvet-effect industrial belt bikini and a Louis Vuitton beach towel.

She doesn’t need to be wearing a bikini to flaunt that flat skinny waist!

The Kansas City Chiefs vs Denver Broncos game will be broadcast live from Empower Field at Mile High on Thursday, October 17 at 8 pm on FOX.