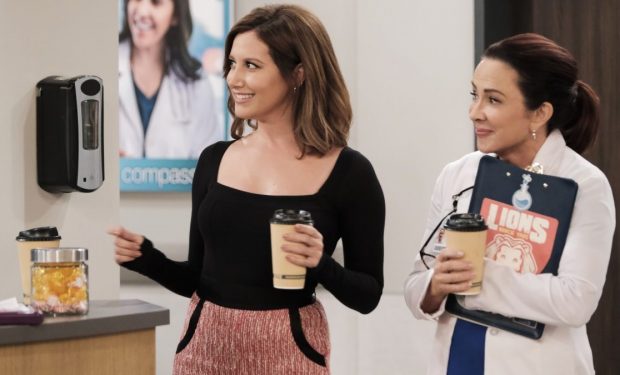 In the Carol’s Second Act episode “The Zebra,” Carol’s (Patricia Heaton) standard, run-of-the-mill case turns out to be something more than it seems, while the other interns battle over who gets the patient with a fascinating and rare problem at Loyola Memorial Hospital.

Fans of the 34-year-old actress/singer Ashley Tisdale (who plays Carol’s gorgeous pharma rep daughter Jenny on the show) might be disappointed with her amount of camera time on this episode. But don’t despair, Tisdale is sharing lots of photos and video of her rocking a ’90s look at Venice Beach Skatepark in California.

Riding a cruiser bicycle and wearing a Valentino bucket hat and black Britney Spears t-shirt listening to Sublime, Tisdale wrote that she “Learned from the Best” and added the hashtag #ItsBritneyBitches. See photo above.

Carol’s Second Act airs Thursdays at 9:30 pm on CBS, right after Mom at 9 pm. [Stream every CBS show through CBS ALL-ACCESS with a free trial.]