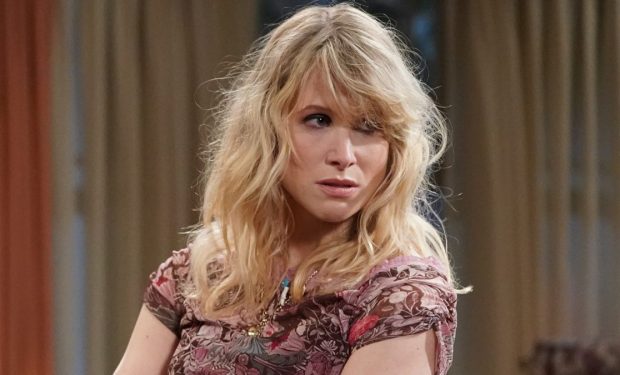 On the Season 2 premiere of The Conners, while pregnant Becky (Lecy Goranson) deals with Emilio’s deportation, and Darlene (Sara Gilbert) gets tangled up in a love triangle, Dan (John Goodman) receives an unexpected visitor at home.

A gorgeous blond comes to the house to tell Dan that his granddaughter Harris (Emma Kenney) gave her son Kyle a homemade pot cookie. Dan admits that he could imagine Harris selling pot at school but baking? Not so much.

Kyle’s mom is portrayed by Lucy Punch. The English-born actress is known for her roles on A Series of Unfortunate Events (Esme Squalor), New Girl (Genevieve), The Class (Holly Ellenbogen), and in films including Into the Woods (Lucinda), Cake (Nurse Gayle), Bad Teacher (Cameron Diaz‘s nemesis Amy Squirrel), Dinner for Schmucks (Darla), Woody Allen’s You Will Meet a Tall Dark Stranger (Charmaine), and Being Julia (Avice Crichton), among others.

The Conners airs Tuesdays at 8 pm on ABC, right before Bless This Mess at 8:30 pm, Mixed-ish at 9 pm, black-ish at 9:30 pm, and the new sci-fi drama Emergence at 10 pm. [BONUS: Stream any ABC show through the ABC GO Digital App found here. Download is FREE.]