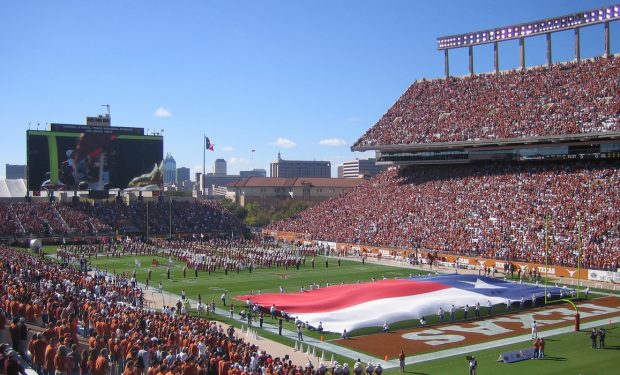 The Oklahoma State Cowboys (3-0) are traveling to Royal Texas Memorial Stadium to challenge the University of Texas at Austin Longhorns (2-1). The Cowboys are 7-2 against the Longhorns — but Texas quarterback Sam Ehlinger “is off to one of the best starts in school history with 11 touchdowns and 956 yards passing through three games,” according to the Associated Press.

When not on the field, Ehlinger spends time with his gorgeous girlfriend Molly Parken. So expect plenty of inspiration for the young QB provided by his nearest and dearest!

Before the 2019-2010 season kick-off, Parken enjoyed herself at a Nantucket beach in a strapless peek-a-boo bikini top (see below).

The Oklahoma State vs Texas game will be broadcast live on Saturday, September 21 at 7:30 pm on ABC. [BONUS: Stream any ABC show through the ABC GO Digital App found here. Download is FREE.]