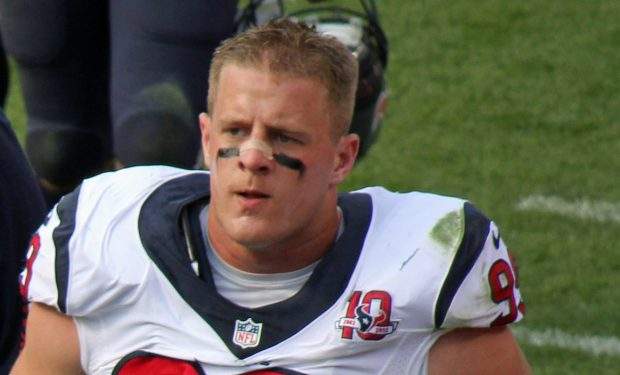 The NFL’s Houston Texans has won one of its three pre-season games (defeating the Lions, losing to the Cowboys and the Rams). For their first regular season game, the Texans face the New Orleans Saints at the Mercedes-Benz Superdome. Texans superstar defensive end J.J. Watt will face off against Saints All-Pro quarterback Drew Brees.

When not on the field, the 6’5″, 288 lbs. Watt spends times with his fiancee, 5’5″ professional soccer player Kealia Ohai. A four-year starter with the North Carolina Tar Heels, Ohai was a member of the U.S. team at the FIFA U-20 Women’s World Cup in Japan. That’s Ohai (below) on the left in the red string bikini.

Ohai is currently captain of the Houston Dash, a team in the National Women’s Soccer League. Interesting fact: she is legally blind in her right eye. She was diagnosed with the astigmatism at the age of 6.

Ohai looks great in a dress, too!

The Houston Texans vs. New Orleans Saints game will air Monday, September 9 at 7 pm on ESPN. It will be followed by the Denver Broncos vs. Oakland Raiders game, scheduled to air at 10:15 pm. [NOTE: Get the ESPN digital app and watch any show. It’s free to download.]