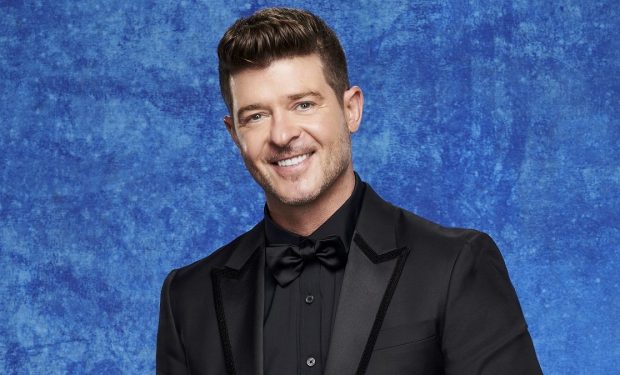 On the Season 2 premiere of The Masked Singer, eight disguised celebrity singers face off against one another in head-to-toe costumes. Of the four celebrity panelists trying to figure out who the identities of the singers, two are singers: Robin Thicke and former Pussycat Dolls lead singer Nicole Scherzinger. Jenny McCartney and Ken Jeong are the other two panelists who provide plenty of comedy relief.

When the 42-year-old Blurred Lines singer isn’t filming The Masked Singer, he’s spending time with his gorgeous 24-year-old fiancée, model April Love Geary. The couple, who have two children together (7-month-old daughter Lola and 19-month-old Mia), got engaged in December 2018. Note: Thicke is also the father of 9-year-old son Julian with his ex-wife Paula Patton.

The Masked Singer airs Wednesdays at 8 pm on FOX.