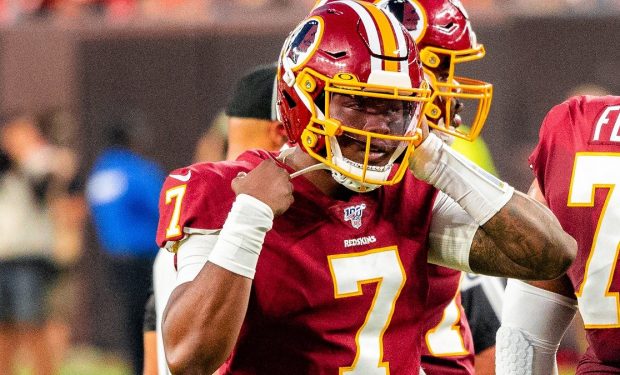 Washington Redskins coach Jay Gruden named Case Kennum as the starting quarterback in August — but the NFL team needs a win after losing their first two games of the season. There’s a chance Gruden will turn to rookie Dwayne Haskins, the 22-year-old who played college football at Ohio State University before being drafted by the Redskins in the first round of the 2019 NFL Draft.

While Haskins is getting ready for the Redskins’ third game of the season, against the Chicago Bears, his gorgeous girlfriend of three years, Savhana Cousin, has been riding her own wave in Malibu.

Cousin has been sharing pics of herself in an orange scoop, high cut swimsuit that reveals a lot of side boob.

When she captioned the photo: “Wine not?” her man Haskins, who almost always comments on her pics, replied “I see what you did there.”

Haskins also likes this bikini pic of her, “Sweet like honey” he wrote. Honey is her nickname; Simba is Haskins nickname.

The Chicago Bears vs. Washington Redskins game will be broadcast live from FedEx Field on Monday, September 23 at 8 pm on ESPN. [Get the ESPN digital app and watch any show. It’s free to download.]