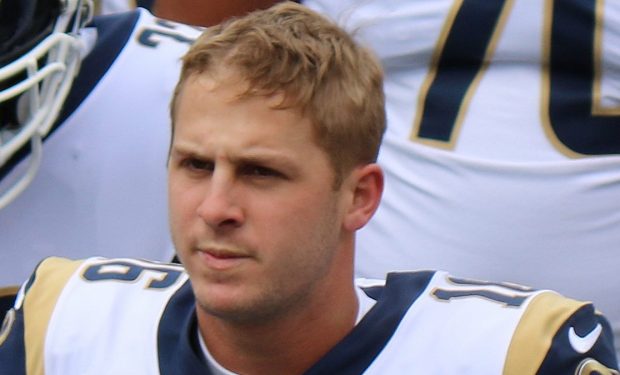 NFL quarterback Jared Goff is aiming to keep the Los Angeles Rams undefeated this season. With two wins under his belt, the Rams face the Cleveland Browns (1-1) at FirstEnergy Stadium.

It’s been a big year for Goff: he signed a four-year extension with the Rams worth $134 million featuring a $110 million guaranteed (an NFL record for guaranteed money); and he made his relationship with lingerie and bikini model Christen Harper public knowledge.

When Goff shared his ESPYs red carpet photo with the Wilhelmina model, fans wrote: “winning off the court” and “that’s a big fat W” among other notes of congratulation and envy.

Harper can act too! Check out the trailer for Auggie. She plays Auggie, an augmented reality companion that Richard Kind‘s character falls in love with.

The LA Rams vs. Cleveland Browns game will be broadcast live on Sunday, September 22 at 8:15 pm on NBC. [BONUS: Stream any NBC show watch LIVE on any device with NBC UNIVERSAL app available here. Download is FREE.]