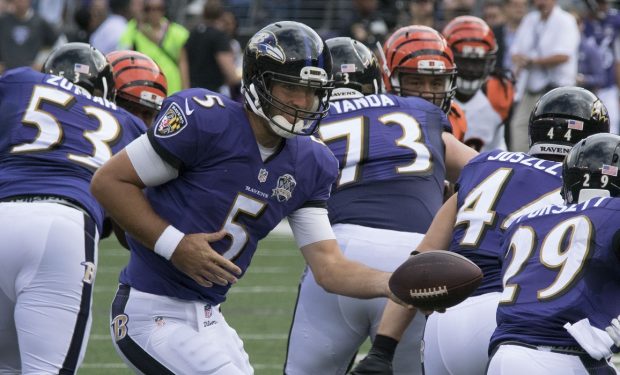 NFL quarterback Joe Flacco was traded to the Denver Broncos earlier this year after being the starting quarterback for the Baltimore Ravens for the past 10 years (2008 to 2018). He’s not the only new guy on the team: he’ll be working with new coach, Vic Fangio, former defensive coordinator for the Chicago Bears. This is Fangio’s first head coach gig.

Before the 2019-2020 season began, the Super Bowl XLVII MVP (Ravens vs. 49ers) brought his gorgeous wife of eight years, Dana (who resembles Oscar-winning actress Reese Witherspoon) and their five kids to Broncos camp at the team’s Mile High Stadium.

Flacco’s eldest child is 7, the youngest is about to turn 3. Joe and Dana are high school sweethearts (Audubon High School in New Jersey).

NFL Films’ Denver Broncos: From the Ground Up is airing on Monday, September 2 at 9 pm on FS1.