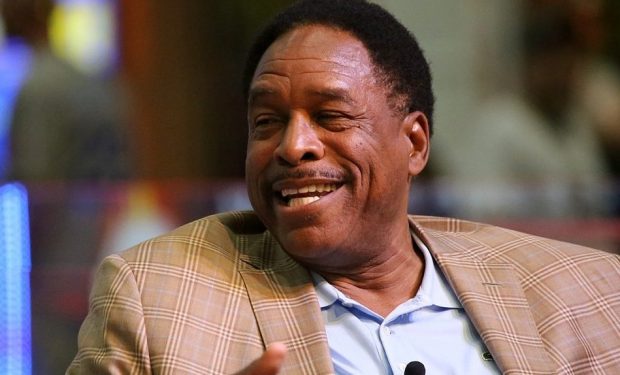 Magic Johnson has a sports resume that can’t be beat, right? The dynamic Lakers legend who transformed the NBA when he arrived as a 6’9″ point guard with x-ray vision must be the best male athlete at any dinner table where Michael Jordan, Bo Jackson or Usain Bolt aren’t dining, right?

Well you’d think, but here’s Magic celebrating his anniversary with two other athletes and their wives.

Now former NFL quarterback Rodney Peete (on left) isn’t challenging Magic for athletic supremacy, despite his gifts and accomplishments on the field. But that big dude to the right in the checked shirt? That is one Dave Winfield, Major League Baseball legend — and that man is an athlete who can easily claim to be Magic’s equal.

Hall of Famer Dave Winfield won seven Gold Gloves and six Silver Slugger Awards while being an MLB All-Star 12 times in his 22-year career. He finished his career with 3,110 hits and 465 home runs.

Not only was Winfield drafted in baseball as a pitcher in addition to a hitter, he was also drafted by both pro basketball leagues at the time, the NBA (Atlanta Hawks) and the ABA (Utah Stars). Just for good measure, even though Winfield didn’t play football, the NFL’s Minnesota Vikings drafted him anyway — just in case he wanted to play pro football!

Hey and at 6’6″ Winfield can pretty much look Magic right in the eye, too, to make his case. These days the 67-year-old apparently kicks back with a Red Bull Tropical Punch, keeping the yellow can on the table. Whether Winfield added a vodka kicker to his Red Bull is between him and the waitstaff at the restaurant.