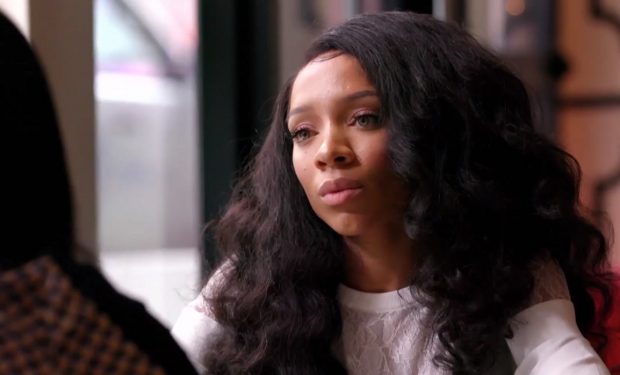 On the Growing Up Hip Hop: New York episode, “Lil Mama Drama,” while Fat Joe schools his son Ryan on making it in the rap business, Rev Run’s daughter Angela Simmons shows up to settle unfinished business with Lil Mama. When Angela asks her, “What did I do?”, Lil Mama reminds her that she comes from money and success.

Lil Mama was born in Brooklyn, raised in Harlem, and is the eldest daughter of eight kids, hence, her nickname. She has said in interviews that she and her family lived in poverty in the city, in shelters for seven years when she was a young child.

(Angela Simmons lived in her family’s opulent mansion in the wealthy town of Saddle River, New Jersey, where they filmed the reality TV show Run’s House.)

When not filming Growing Up Hip Hop: New York, Lil Mama aka Niatia is likely on a photo shoot. She was the subject of photographer James Anthony for the cover of the body issue of Ellements. The two photos here, especially the see-thru rhinestone string bikini with tassels and matching choker is causing a big stir. She looks like a modern day Josephine Baker, the iconic burlesque dancer known to wear long beaded necklaces and a girdle of bananas when she performed on stage.