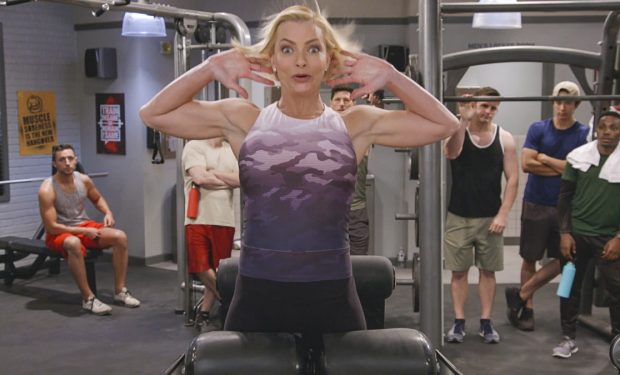 On the Season 7 premiere episode of Mom, “Audrey Hepburn and a Jalepeño Pepper,” while Bonnie (Allison Janney) struggles to enjoy her perfect honeymoon with Adam (William Fichtner), her daughter Christy (Anna Faris) makes some questionable changes at Adam’s bar in his absence. No doubt, Christy’s friend Jill (Jaime Pressly) will have a few things to say about it, too.

When not filming Mom, Pressly enjoys her down time literally hanging around in a bikini. In the photo above, she thanked everyone at San Ysidro Ranch, which is nestled in the Montecito foothills of Southern California, for “the most relaxing birthday weekend ever!” She says it’s the “Most rejuvenated I’ve felt in a long time! This place never disappoints.”

How does the 42-year-old mother of three (a 12-year-old and almost 2-year-old twins!) keep that body in shape? Check out her impressive workout video above! Her early teenage years training as a gymnast show!

It helps that she had a good base to work with!

Mom airs Thursdays at 9 pm on CBS, right before the new sitcom The Unicorn at 8:30 pm and before another new comedy Carol’s Second Act at 9 pm. [Stream every CBS show through CBS ALL-ACCESS with a free trial.]