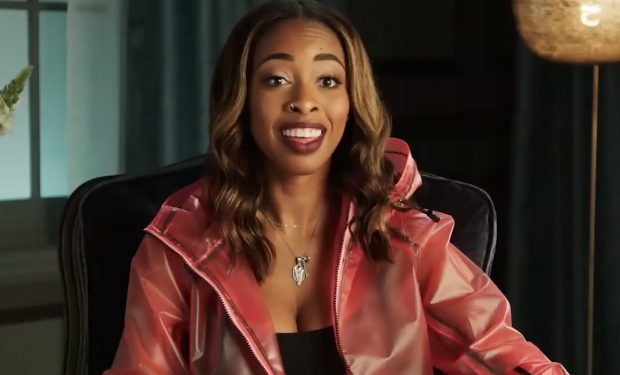 Angie on Growing Up Hip Hop: New York on WEtv

Most of the young stars on Growing Up Hip Hop: New York were raised in wealthy suburban households including Fat Joe’s son Ryan and Ja Rule’s daughter Brittney. While Lil Mama found a way to make it against all odds (she is one of 8 kids in her family who lived in homeless shelters in the city), Irv Gotti‘s son J.J. Lorenzo has been “coddled”, according to his sister Angie Pearson.

After celebrating J.J.’s 20th birthday at the swanky restaurant Tao in downtown Manhattan, Angie tells J.J. she can’t believe their father gave him a Rolex watch for his birthday. J.J. admits that he was shocked and reminds Angie that she has received expensive gifts too including “flights” for travel.

Based on her Instagram account, she’s been redeeming a number of birthday presents this summer and enjoying her trips around the world (Jamaica, Indonesia, et al) in a number of cute bikinis and with her boyfriend aka Coach Jack (see above).

And sipping on a coconut drink in Indonesia…

When she posted the photo, she captioned it: “Can I Get Paid To Vacation Like This Por favor?” Her father replied: “haha. Paid to go on vacation. That would be the best job in the world. Lol.”