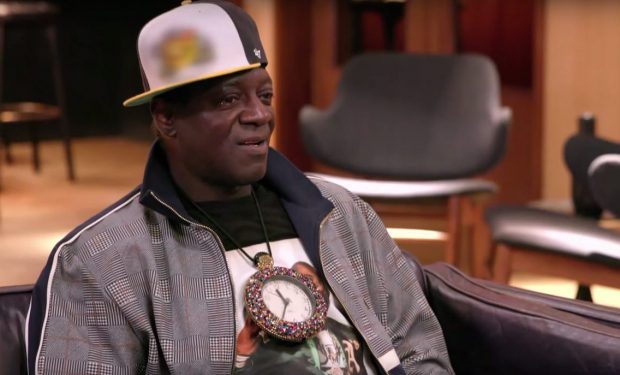 On the Growing Up Hip Hop: New York episode “Flavor of Love,” 60-year-old former Public Enemy hype-man Flavor Flav visits his daughter Da’Zyna (aka Kushy) and son Quan (aka Flee) in the studio. Flav is impressed. He tells his son, “That’s dope,” and tears up.

Da’Zyna, who’s managing Quan’s rap career tells the camera, “It’s actually awesome that my dad loves this song.” When Flav says, “That needs to be on the street,” Da’Zyna replies, “I’m trying to get it there.”

In the studio, after Flav wipes away his tears, Da’Zyna proposes turning the single into “a family project” and asks their father if he’ll do some ad-libs on the track.

When Flav stammers and doesn’t agree to it right away, Da’Zyna warns her father, “I don’t want to put any half-assed work out there.” Flav finally says, “I’m stuck between a rock and a hard place right now.” He says he has “important meetings he has to attend to” and then he tells his kids, “I can’t.”

Keep in mind, earlier on the show (video above), Quan said: “Having my pops, Flavor, on a track could do a lot.” He added, “This is like only the big thing I really asked of him. And I know this sh*t gonna push my career to some high ass points because he’s a legend.”