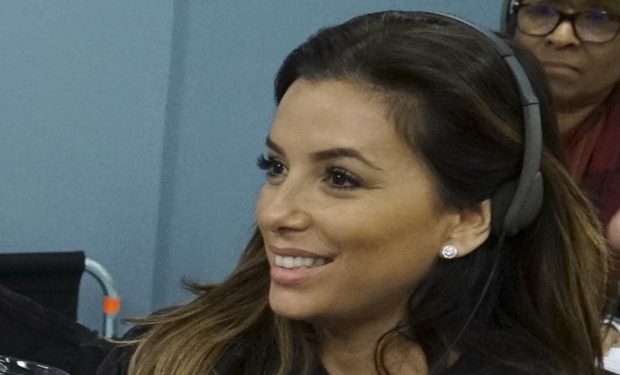 In the Season 1 finale of Grand Hotel, “A Perfect Storm,” while hotel owner Santiago Mendoza (Demian Bichir) struggles with life-changing news, waiter Danny Garibaldi’s (Lincoln Younes) true identity is revealed, and what happened to his sister Sky (Arielle Kebbel) — who used to work at the hotel and then disappeared — is also revealed.

While not producing or directing or guest starring on Grand Hotel, Eva Longoria is either on a different set, playing with her adorable baby boy, or working out in the gym. In the videos above and below, the 44-year-old supermom is almost unrecognizable without makeup as she lifts weights. She may not look the way we’re accustomed to seeing her, but she still looks stunning.

Grand Hotel airs Mondays at 10 pm on ABC. P.S. Longoria will appear next on the big screen in the 2020 film Sylvie with Tessa Thompson (Charlotte on Westworld). It’s set in Harlem in the late 1950s.