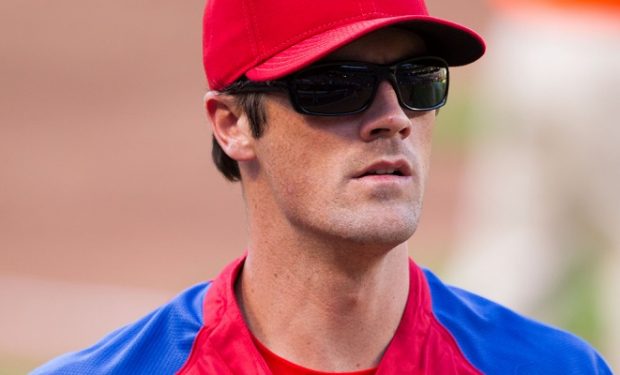 Professional baseball pitcher Cole Hamels of the Atlanta Braves is married to his wife of almost 13 years, Heidi Strobel. Prior to getting married and starting a family (they have four kids), Strobel left her hometown of Buffalo, Missouri and competed on the reality TV show Survivor: The Amazon (Season 6, 2003). Strobel, who was 24 at the time and working as a gym teacher, made it far on Survivor — she made it to Day 36 (out of 39 days).

One of the most memorable moments occurred on the seventh episode, “Girls Gone Wilder.” At the immunity challenge, Strobel and swimsuit model Jenna Morasca (who eventually was named Sole Survivor and won the $1 million prize) stripped naked in exchange for peanut butter and chocolate. After the show aired, the two young women appeared on Howard Stern‘s TV show (June 2003) and posed together for Playboy (August 2003).

Heidi recently shared the before and after Survivor photos, above. While she regrets the “horrid” spray tan in her youth, she is rightfully proud of the body and mind that she’s grown into. As she writes, it “took a shit load of work.”

All that work is paying off!

The Chicago Cubs face the San Diego Padres at Petco Park on Wednesday, September 11 a 10 pm on ESPN, right before the Braves vs. Phillies game at 7 pm. [NOTE: Get the ESPN digital app and watch any show. It’s free to download.]