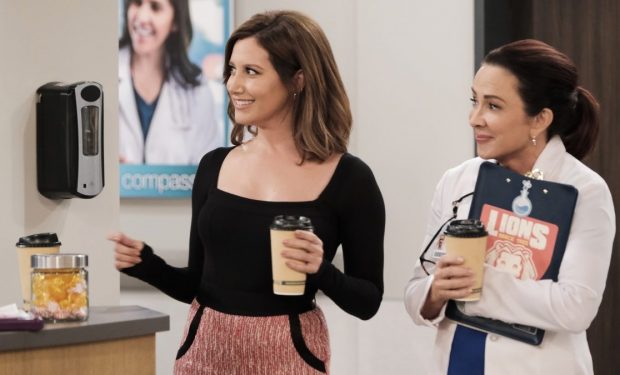 Everyone Loves Raymond star Patricia Heaton stars in the new medical comedy Carol’s Second Act. She plays Carol Kenney, a 50-year-old divorced retired teacher who is pursuing her dream of becoming a doctor.

When not filming Carol’s Second Act, Tisdale, the 34-year-old former Disney star, shares her life experiences on Instagram where the social media influencer has more than 11 million followers.

She occasionally posts throwback pics like the series above, “where the paps got the play by play of my kayak going under.”

Tisdale is known for her roles as Maddie on The Suite Life of Zack & Cody and as Sharpay Evans in the High School Musical TV show, movies and concerts. After a ten year hiatus, Tisdale released her third studio album, Symptoms, in May 2019.

Carol’s Second Act airs Thursdays at 9:30 pm on CBS, right after Mom at 9 pm, and right before the psychological thriller Evil. [Stream every CBS show through CBS ALL-ACCESS with a free trial.]