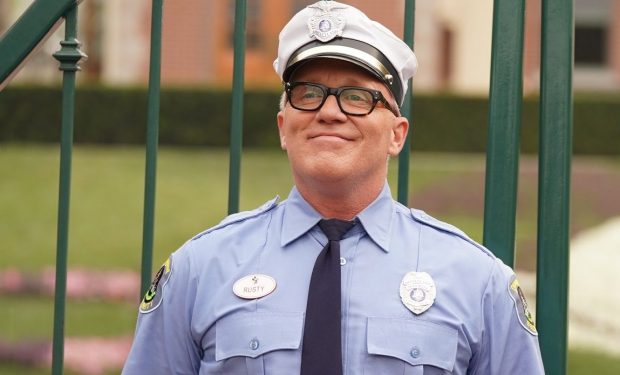 In the Season 7 premiere of The Goldbergs, before Erica and Barry go off to college, the family takes a hilarious road trip for a vacation at Disneyland. Along the way they bump into two actors from the classic 1983 National Lampoon’s Vacation movie — Christie Brinkley (who’s still driving a red Ferrari) and Anthony Michael Hall who played Chevy Chase‘s son Rusty Griswald in the movie.

In real life, just two weeks prior to The Goldbergs premiere, the 51-year-old Hall announced that he got engaged in Sicily, Italy. His fiancee is actress Lucia Oskerova and she looks fabulous in bikinis!

The gorgeous blond has appeared in films including The Last Sharnado: It’s About Time and White Chicks, among others. Watch her reel below.

The Goldbergs airs Wednesdays at 8 pm on ABC right before its spin-off Schooled at 8:30 pm, followed by Modern Family at 9 pm, Single Parents at 9:30 pm, and new action crime drama Stumptown at 10 pm.