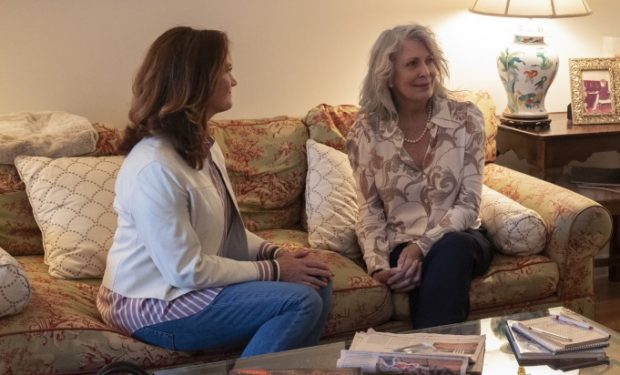 In the Season 6 premiere of NCIS: New Orleans, Dwayne Pride (Scott Bakula) is considered for another promotion which would mean a transfer to D.C. When he tells his girlfriend Rita Devereaux (Bakula’s real life wife Chelsea Field) he’s not crazy about the job she reminds him she lives in D.C., and he gives her a kiss on the lips.

Rita chides him for kissing her. “I don’t want to have smeared lipstick the first time I meet her,” she says, referring to Pride’s mother. He grimly replies, “She might not notice.”

Pride’s mother is portrayed by Hollywood legend Joanna Cassidy, who in real life is only 10 years older than Bakula! Days before the NCIS: New Orleans season premiere, Cassidy posted an absolutely amazing photo of herself in a strapless string bikini (above), and wrote: “Age is just a number.” Holy cow!

Hey, Joanna Cassidy has always looked great in a bikini…

Cassidy is known for her TV roles on Life in Pieces (Jen’s mother), Odd Mom Out (Candace), Six Feet Under (Margaret Chenowith), and Buffalo Bill (Jo Jo White), among others. She’s also well recognized for her roles in films including Blade Runner (Zhora) and Who Framed Roger Rabbit (Dolores) with the late Bob Hoskins.