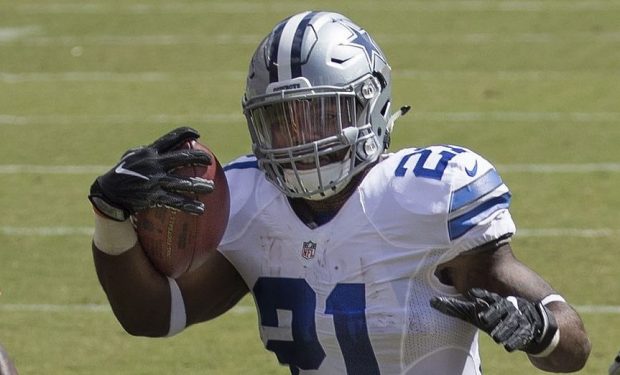 Dallas Cowboys draft pick Mike Weber is a Buckeye at heart, and he wears his heart on his sleeve like another famous Buckeye who is looking forward to joining the Cowboys, Zeke Elliott. Elliott is reportedly in Cabo, working out during his NFL holdout — but it’s all a formality, and everybody including Cowboys owner Jerry Jones says a deal is imminent.

Hey, the other two big Cowboys looking for Jones deals are Dak Shepard and Amari Cooper. And those guys have so much faith things will work out they’re actually in camp. And one guy they are seeing there is Weber.

Even Zeke Elliot is shouting out his former Ohio State teammate — from a distance. Elliot reshared a Cowboys tweet showing Weber’s blistering speed at work in training camp (below), with the cool caption: Show em what you got, earn the star. These two guys may wear Buckeyes hearts on their sleeves, but they are looking forward to wearing Cowboys stars on their helmets together.

When Weber was a freshman, Zeke was a senior at Ohio State. He showed the young man the ropes there, as he explains below. It’s gonna be good again, you get the feeling.