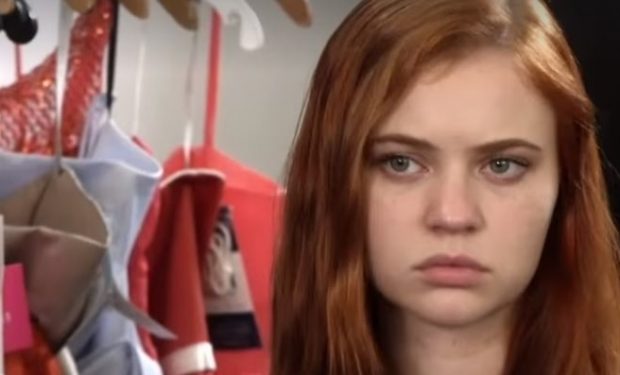 Sierra McCormack in Who Stole My Daughter? on Lifetime

The protagonist of the Lifetime movie Who Stole My Daughter? is Janet Sullivan (Samaire Armstrong). When her 12-year-old daughter Katie (Sofia Mali) disappears from her school one fall day without a trace, she organizes a nationwide manhunt but, alas, she doesn’t find Katie.

Five years pass before Katie – now 17 and suffering from severe trauma – shows up at her mother’s doorstep. Her kidnappers have returned too and they want Katie to kill!

17-year-old Katie is portrayed by 21-year-old Sierra McCormick, who is best known for her role as awkward sidekick Olive Doyle in the Disney Channel TV series A.N.T. Farm from 2011-2014. McCormick is also recognized for her roles in the 2010 movie Ramona and Beezus (stuck-up Susan) and as 9-year-old Seinfeld fan Emma on Larry David’s Curb Your Enthusiasm, among others.

When not filming, she’s showing off her incredibly skinny waist in crop top selfies!

McCormick will appear next on the big screen in VFW. She plays a teen who is being harassed by a deranged drug dealer and is defended by a group of war veterans who hang out at the local VFW. Stephen Lang (Avatar), William Sadler (Bill & Ted’s Bogus Journey, The Shawshank Redemption) and George Wendt (Cheers) star.

Who Stole My Daughter? premieres on Lifetime on Friday, August 30 at 6 pm.