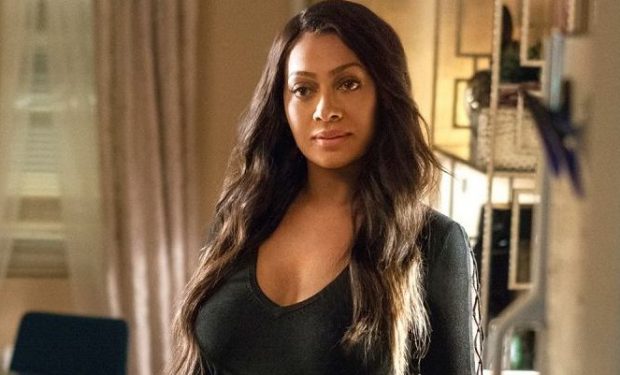 The original cast of the 1990s teen soap opera Beverly Hills, 90210 is reuniting for the reboot BH90210 on Fox. Jason Priestley, Shannen Doherty, Jennie Garth, Tori Spelling, Ian Ziering, and the rest of the gang (alas, without the late Luke Perry) play themselves at a 30th anniversary convention in Las Vegas. At the reunion, they meet Shay, who’s portrayed by Power actress Lala Anthony.

Hours before the BH90210 premiere, the wife of NBA basketball legend and current free agent Carmelo Anthony, posed a series of photos of herself wearing a striking and strappy monokini on a Bermuda beach which is causing a serious meltdown on Instagram.

BH90210 airs Wednesdays at 9 pm on FOX. Season 6 of Power premieres on Sunday, August 25 on Starz. If you can’t wait until then, watch Lala in the Power trailer or in Drake’s “In My Feelings” music video, both below. [BONUS: Stream any FOX show through the FOX NOW: Live & On Demand app here. Download is FREE.]