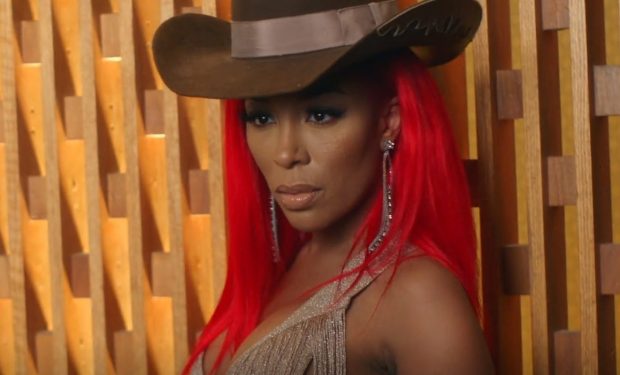 The cast of Love & Hip Hop Hollywood is back for Season 6 including well-known R&B artist K.Michelle, who now goes by Kimberly. When not tending to her surrogate Tannae, who’s carrying twins!, Kimberly is expanding her career and dipping into country music. In the sneak peek video below, she’s seen wearing a cowboy hat and line-dancing at a country bar.

During an interview with radio host Jason Lee, Kimberly says: “I can yodel, I can sing, I can play the guitar and I will sing any white motherf—er down, because that’s our music. We started this country music — black people.”

While in Nashville, she made a similar declaration — laced with profanities — and claimed to be working with country musician/songwriter Chris Stapleton and that she will be the next Taylor Swift. Video above.

In video below at Webster Hall, at the one-minute mark, you can watch and listen to Kimberly belting out a country medley, and her fans love it.