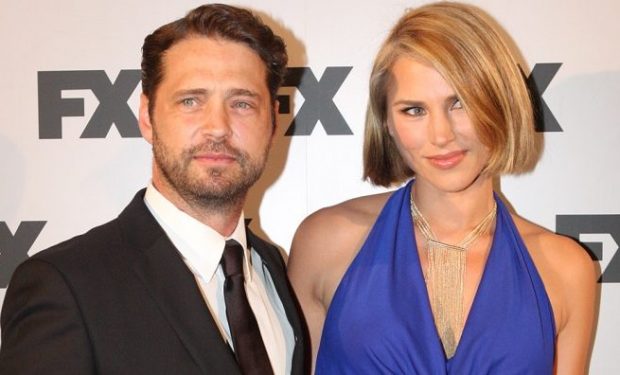 Beverly Hills, 90210 fans will be surprised to see their beloved actor Jason Priestley cast as a grandfather in the Lifetime movie V.C. Andrews’ Dark Angel. He’s only 49! He plays Tony Tatterton, the wealthy grandfather of young heroine Heaven (Annalise Basso) who starts a new chapter of her life at his mansion with his wife Jillian (Kelly Rutherford, Melrose Place, Gossip Girl).

When not on a TV or movie set, Priestley spends his time with his gorgeous wife Naomi Lowde-Priestley. They married in 2005, and have two children, a 12-year-old daughter and a 10-year-old son. Naomi is a personal trainer at Mimi Benz’s The Sweat Shoppe in Los Angeles, where she gives heat training spinning classes. Based on the photos below (by Felicity Murphy), Naomi “trains like a girl” in a strappy front bodysuit that shows off her incredibly toned body.

She looks great in a bikini too!