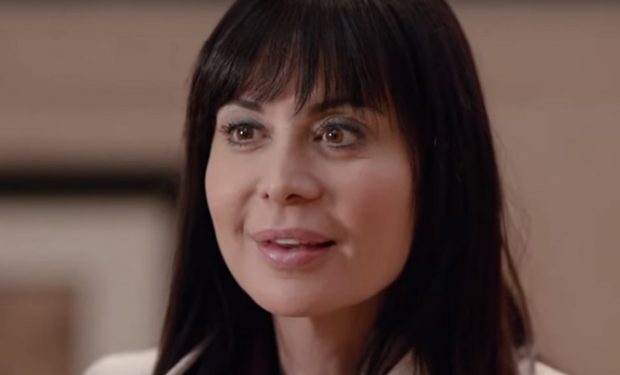 In the Good Witch episode “The Comet,” the town of Middleton is abuzz with the arrival of Pozner’s Comet which appears once every hundred years. Cassie (Catherine Bell) shares the secret of the comet: “Your wish will only come true if you make it while watching the comet from the Middleton Observatory.”

But there is a catch: “Everyone gets to make a wish, but not all wishes are granted.” A mysterious woman named Mrs. Hansen, portrayed by veteran actress Linda Thorson (left in photo below), joins in the fun.

The 72-year-old actress Thorson is best known for replacing Diana Rigg on the 1960s spy TV series The Avengers. She was 20 at the time.

Two years later, at the age of 22, Thorson says she had a six-month affair with Frank Sinatra who was 31 years her senior. (Sinatra would be 103 this year if alive.) Thorson said the affair with Sinatra was “heaven on earth.” The crooner later became the godfather of Thorson’s son Trevor Boggs. (Trevor’s father is Thorson’s third husband, American news anchorman Bill Boggs. Thorson married four times.)

The Canadian-born Thorson is also known for her roles in the 2002 film Half Past Dead with Steven Seagal and rapper/actor Ja Rule. She most recently played a soap opera actress, Gloria Gregson, on Eugene Levy’s Schitt’s Creek. Good Witch airs Sundays at 8 pm on Hallmark Channel.